Back to Produce Guide

Before beginning cleaning scallions, examine each scallion shoot for the presence of a leaf miner trail.
The shoots should be examined in a well-lit area or over a light box. Leaf miners leave a clear, easily discernible trail on the green shoot. If a trail is found, cut away that portion of the shoot or discard the entire shoot on which the trail was found.

4.While holding the scallion under a strong stream of water, rinse the entire scallion. While rubbing your finger on the scallion, allow the water to flow between the layers of the scallion, including the top portion (shoot) of the scallion.
5. After the above steps are followed, no further inspection is necessary. 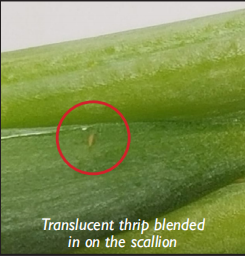