Back to Produce Guide

The topic of flour as it relates to the requirement of sifting is a subject with various opinions. Before we present some of the approaches, it is important to emphasize that flour during the warmer months (May – October), is measurably more prone to insects than during the rest of the year. Generally during the winter months, flour, both because of the outside weather conditions and inside storage conditions, is less prone to insect presence. Nevertheless, it is a good practice to take three cups of flour, pour them onto a white surface (e.g., a paper plate or parchment paper), and with your fingers spread out the particles of flour while looking for small insects or worms. This practice, at minimum, should certainly be done during the summer months as well. If insects are found, the entire bag should be checked. If three insects are found in the bag, discard the entire bag. For one who does much baking (this is especially applicable during the summer months), there is a very simple, easy, and affordable method to process your flour. An electric sifter, such as the Pelematic, which has a 70- mesh strainer, sifts flour quickly and completely removes any insects that might be in the flour

NOTE: It is especially crucial for those who use yoshon flour produced by the smaller companies to store the flour in a cool, dry place. Unsuitable storage conditions can directly lead to infestation of the flour. This is especially true during hot summer days. The above-recommended process of sifting should be followed as well.

NOTE: Whole wheat flour cannot be sifted due to the size of the flour. Since the holes of a typical sifter will not allow the flour to pass through, one who wants to check whole wheat flour must follow the process of inspecting three cups of flour on a white paper plate or parchment paper. If insects are found, the entire bag should be checked. If three insects are found in the bag, discard the entire bag. 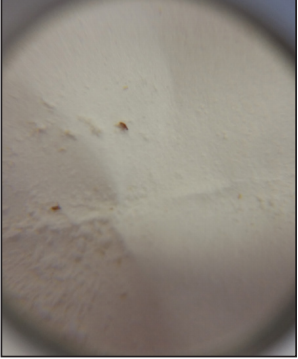